Finally, Robinson Tree Service can provide our customers with seasoned firewood for the winter ahead. Call us today and get great preseason rates. 901-363-3539 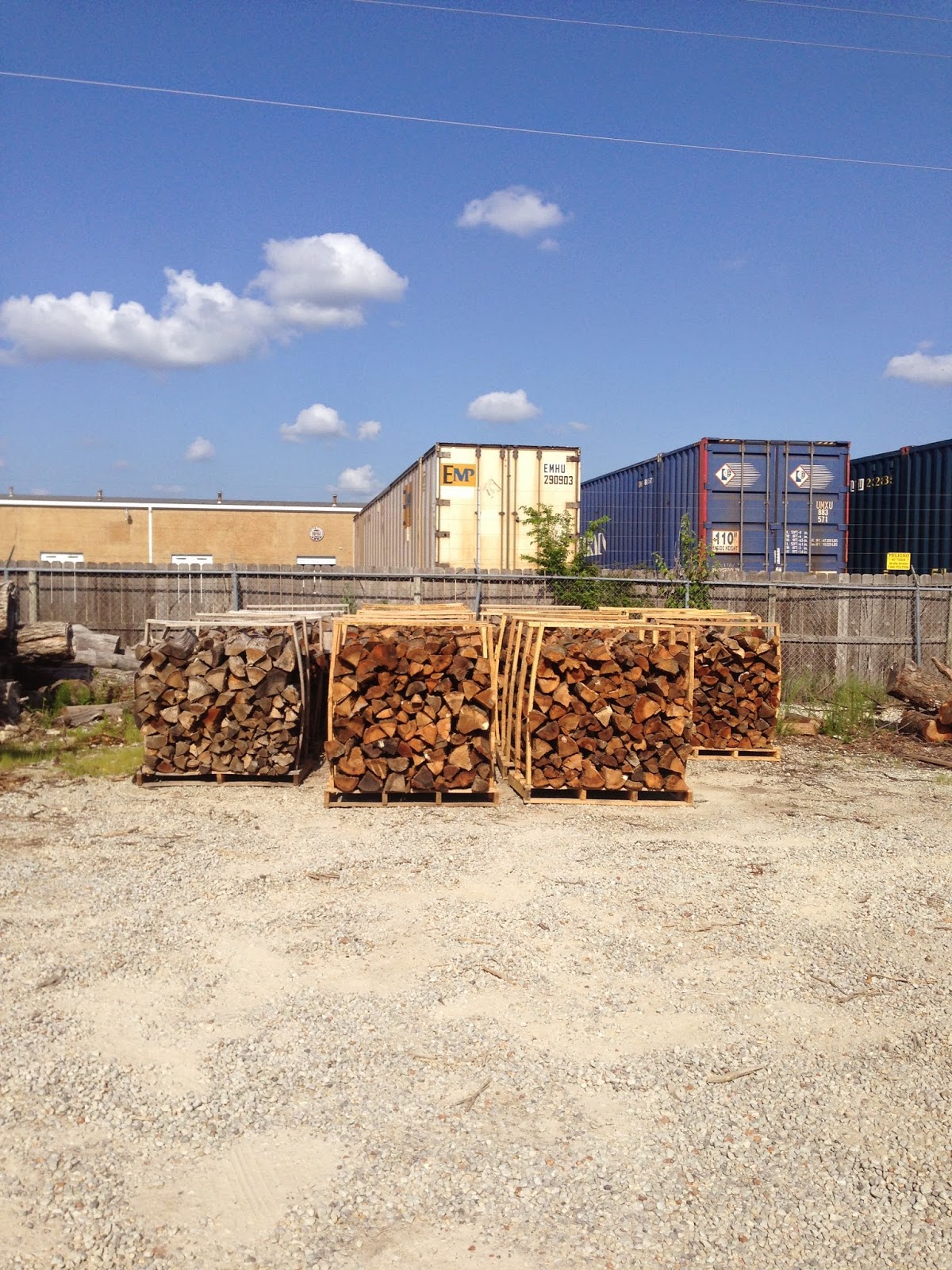 Posted by Trees by Robinson Tree Service at 10:50 AM 2 comments: 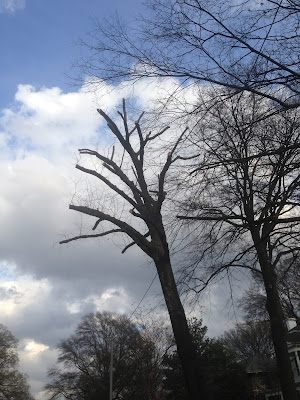 Here is a picture of a topped tree recently butchered by a very reputable tree service company in the Memphis area. In fact, when I saw this after this company left, I could not believe they had performed such crude work on a Memphis tree.

Here is an excellent article Plant Amnesty explaining what's wrong with topping. Robinson Tree Service is a professional tree service company and would never top a tree. In fact, if a customer wanted us to top a tree we would have to politely decline the request.

The misguided practice of tree topping (also referred to as stubbing, dehorning, pollarding, heading, and by several other euphemisms) has risen to crisis proportions nationally over the last decade.  Topping has become the urban forest's major threat, dramatically shortening the lifespan of trees and creating hazardous trees in high-traffic areas.
The importance of trees to the urban and global ecology is only now becoming fully known and appreciated.  This dawning has not yet been accompanied by adequate public education and sound public policy to ensure tree survival and our own safety.
DON'T TURN YOUR VALUABLE COMMUNITY ASSETS INTO LEGAL, AESTHETIC AND ECONOMIC LIABILITIES! PLEASE READ AND CONSIDER THE FOLLOWING.

Topping won't work to keep trees small.  After a deciduous tree is topped, its growth rate increases.  It grows back rapidly in an attempt to replace its missing leaf area.  It needs all of its leaves so that it can manufacture food for the trunk and roots.  It won't slow down until it reaches about the same size it was before it was topped.  It takes at maximum a few years before your tree returns to near its original size.
An exception to the grow-back-to-size rule comes if you damage a tree's health so it hasn't the strength to re-establish itself.  It is, in effect, dying and will continue on a downward spiral for years.  Topping can't make a significant size difference-not for long.  The species or type of tree you have determines its size.  A dogwood or Japanese maple may grow from 10 to 30 feet in its life, an oak or an ash from 10 to 90 feet.  You can't "stop" trees with topping.  If you succeed, you have killed them.

A topped tree must be done and re-done every few years-and eventually must be removed when it it dies or the owner gives up.  Each time a branch is cut, numerous long, skinny young shoots (called suckers or watersprouts) grow rapidly back to replace it.  They must be cut and recut, but they always regrow the next year making the job exponentially more difficult.  Much like the many-headed Hydra snake that Hercules battled, people create maintenence monsters in their back yards.  A properly pruned tree stays "done" longer, since the work does not stimulate an upsurge of regrowth.  Proper pruning actually improves the health and beauty of a tree, costing you less in the long run.
Topping also reduces the appraised value of your tree.  A tree, like any landscape amenity, adds to the value of your property.  Appraisers subtract hundreds of dollars from the value of a tree when it's been topped (using the International Society of Arboriculture's guidelines for evaluation).  You can even sue a tree company for wrongfully topping a tree.

The sight of a topped tree is offensive to many people.  The freshly sawed-off tree limbs are reminiscent of arm or leg amputations.  And the freshly-sawed look is just the beginning of the eyesore; the worst is yet to come, as the tree regrows a witch's broom of ugly, straight suckers and sprouts.
The natural beauty of the tree's crown is a function of the uninterrupted taper from the trunk to ever finer and more delicate branches, and the regular division of the branches.  Arborists consider the topping of some trees a criminal act, since a tree's 90-year achievement of natural beauty can be destroyed in a couple of hours.
Topping destroys the winter silhouette of a tree.  The regrowth of suckers or shoots will bloom poorly, if at all.  Some trees will reestablish themselves after many years-but by then they will be the same size as before. Many topped trees are considered a total loss.

According to Dr. Alex Shigo, world renowned scientist and author on the subject of arboriculture (trees), topping is the most serious injury you can inflict upon your tree.  Severe topping and repeat topping can set up internal columns of rotten wood, the ill effect of which may show up years later in conjunction with a drought or other stress.
Ironically, many people top their trees because they think it will make them safer.  Topping creates hazardous trees.  In many cities, topping is banned because of the public safety factor and the potential for lawsuits.
Topping creates a hazardous tree in four ways:

IT ROTS.  Topping opens the tree up to an invasion of rotting organisms.  A tree can defend itself from rot when side branches are removed, but it has a hard time walling off the pervasive rot to which a topping cut subjects it.  Rotted individual limbs-or the entire tree-may fail as a result, often years later.

Topping makes you appear to be a cruel or foolish person.  Your friends know you better.  But the more your neighbors come to understand topping for what it is, the lower you will fall in their esteem.  You may top a tree to create a water view, but you should know that you have some friends and neighbors-who probably won't say so because they are being tactful-who see a view of a butchered tree with water in the background.

Posted by Trees by Robinson Tree Service at 9:25 AM 1 comment:

A good question and answer about Pecan trees in the Commercial Appeal. Pecan Trees

Posted by Trees by Robinson Tree Service at 11:40 AM No comments:

Here is an important article on the rules for cleaning up tree debris on the street in Memphis.
tree debris removal. Be very careful when hiring a tree service company to do work in your yard. Make sure they are going to remove the debris when finished. Robinson Tree Service always removes all debris generated with trimming and removing your trees. It is included in the price.
Posted by Trees by Robinson Tree Service at 9:37 AM No comments: 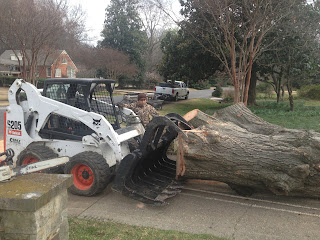 A large tree removal in Hyne Park. The tree had a dead and broken top and squirrels had made a home inside the trunk. It was very large and a very big branch hung over the neighbors' house. The home owner made a very wise decision to have the tree removed.


Winter is one of the best times to decide to remove a
large tree. There is much less risk in damage to your
landscape and much less debris to remove. 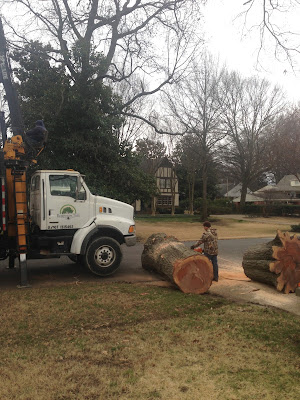 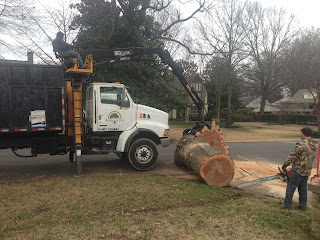 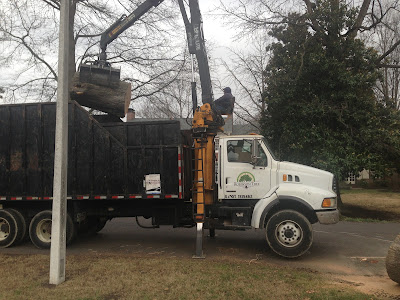 Posted by Trees by Robinson Tree Service at 9:02 AM No comments:

It really is unfortunate when we have trouble with trees in our neighbors' yard or they have problems with yours. Here is a link for information concerning those conflicts.
Conflicts Involving Trees and Neighbors
Posted by Trees by Robinson Tree Service at 10:19 AM 1 comment:

This is a short video of a very large tree removal in midtown. It shows how a crane is utilized to lower the large limbs lowered very easily down on your property.

Posted by Trees by Robinson Tree Service at 12:10 PM 2 comments: